The electrification of the bicycle has historically meant just that: A bike, but with an electric motor. You might find some other smart conveniences on higher-end models, but "less is more" has usually been the way. Urtopia, the latest e-bike brand from China, has other ideas. Its debut ride is, on paper, one of the most tech-heavy bikes we’ve seen. The spec sheet reads more like a phone’s than a next-gen fixie.

For example, beyond the 250W hub motor with three levels of riding assist (and an estimated 30-80 mile range), there’s an integrated dot-matrix display, a fingerprint reader, GPS, 4G (via eSIM), mmWave sensors for vehicle detection, an integrated alarm and, well… the list goes on.

The bike itself has a striking aesthetic that doesn’t bother to hide the fact that this is possibly the most technologically advanced model you’ll see this year. The frame was designed by Mathis Heller who has experience with BMW and IKEA among others, and it’s pure curves and racing lines. The stealth bomber look is further enhanced with all the cables hidden from view inside the frame. The Urtopia is pitched as a city bike and while the (removable) battery isn’t overly obvious, there’s no doubt to even the most casual of glances that you’re not wielding a regular analog pedaller.

When this thing arrived, I was dreading putting it together. Previous experience has taught me that while not complex, you’ll want to set aside some time (and space) to get things set up. Turns out, the prototype model I tested only really needed the front wheel inserted and the tires pumped and I was good to go. 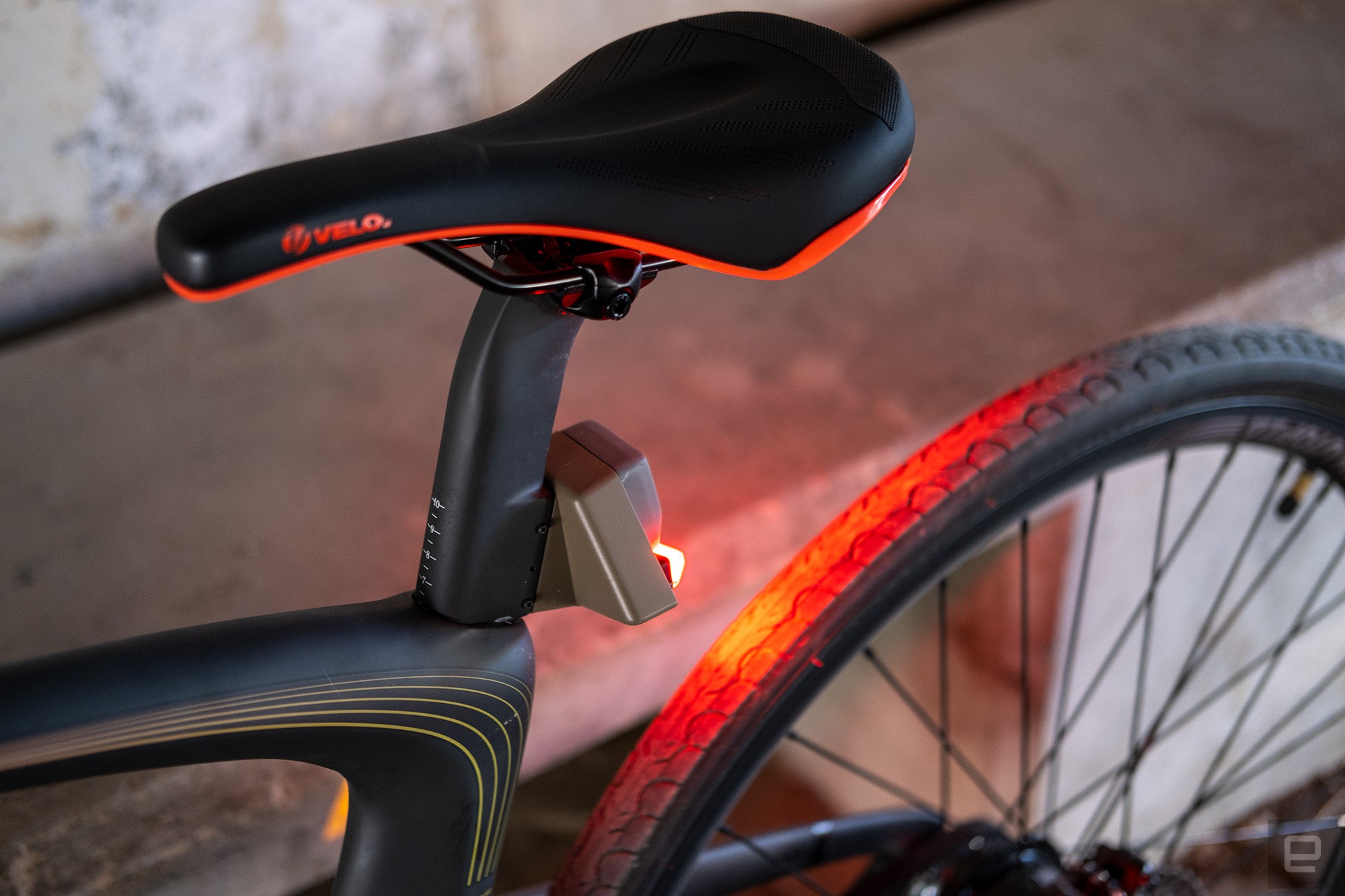 The obvious draw here for gadget fans will be the “smartbar” — an onboard computer built right into the handlebars. The dot matrix display is the centerpiece of the bike and only dials up that “bike from the future” vibe. On the right-hand side where the bell would usually be is the fingerprint reader which interacts with the computer in a few ways (it’s also a digital bell). The left-hand side houses the four-way D-pad which is where you change modes and settings along with powering the bike on (but not off, more on that later).

Despite that long list of smart features, not all of them were available to test on the prototype I was sent. The hardware for the mmWave sensors is there, but there’s no way to activate it. The GPS and eSIM require the companion app to work and that’s not ready yet also. Sadly, those are some very interesting features we’ll have to wait and see on, but most everything else was present and correct.

Before the fun stuff, the basic e-bike functionality (power/speeds/range etc.) appears to be on par with other hub-motor bikes I’ve tried. For example, I recently tested the Tenways city bike, which has a 250W battery and motor compared to the Urtopia’s 360Wh cell. But both have 250W torque-based brushless hub motors and the same Gates carbon belt.

Things get more exciting once you turn the bike on. You’ll be greeted with a wooshing sound from the speaker in the smartbar and the company logo appearing on the display before defaulting back to the speedometer. I am informed that some of the sounds will be user-configurable and I hope that includes the option to turn them off. Before you ride, you’ll want to familiarize yourself with the controls. Up and down on the D-pad will cycle through the assistance levels: Pedal mode, Eco, Comfort and Sport (there’s also a “Turbo” mode which is akin to a “throttle” mode). 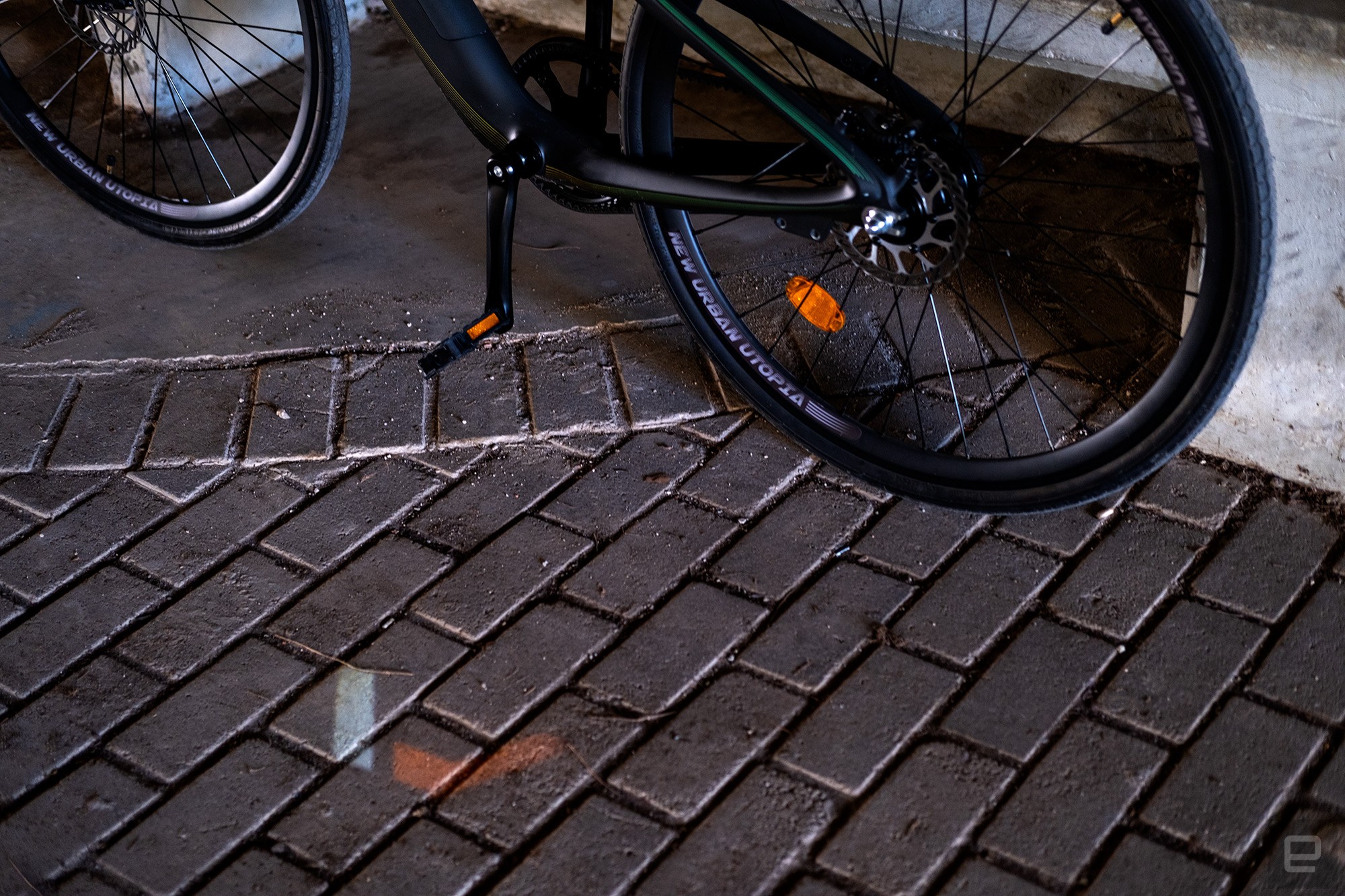 Tap left or right, and you’ll be presented with turn signals projected on the ground (these also remain on when the lights are on but flash when you initiate a turn). To switch the actual lights on, however, involves speaking to the bike — there’s no manual control, only voice.

This is where things get a little goofy. Urtopia warns in its press materials that the voice recognition system hasn’t been fully “trained.” Yet, for me, it worked perfectly. Perhaps they only trained it on dull-voiced Britons? Anyway, to turn the lights on you’ll need to place a digit on the fingerprint reader and wait for the face icon to appear on the screen letting you know you can issue your command like some sort of Belgian Michael Knight. It’s cool but I’d still like a physical switch so that I don’t have to talk to my bike in public, not least because when you’re riding, it’s harder for the smartbar to hear your voice thanks to the rustling wind, etc. The result is you either have to stop for a second or lean into the handlebars as you go, neither is very elegant.

The list of things you can currently control with your voice includes: Change speed mode, lock the bike, indicate a turn and change the smartbar’s volume. All of those, bar the volume (and lights) have physical controls too. It’s a cute idea and presents a hands-free option, but in practice, I do wonder how useful it is over a nice button you can mash.

Another feature that feels like technology doesn’t necessarily improve is the bell. On this bike it’s built into the fingerprint reader. A long press activates voice recognition, a short press will emit a digital “ring ring.” It works fine, but it’s not as responsive as a physical bell would be. I had times where I was approaching someone from behind and wanted to alert them to my presence, only for the bell to sound half a second after I passed them. Other times it took two or three tries for it to even trigger. 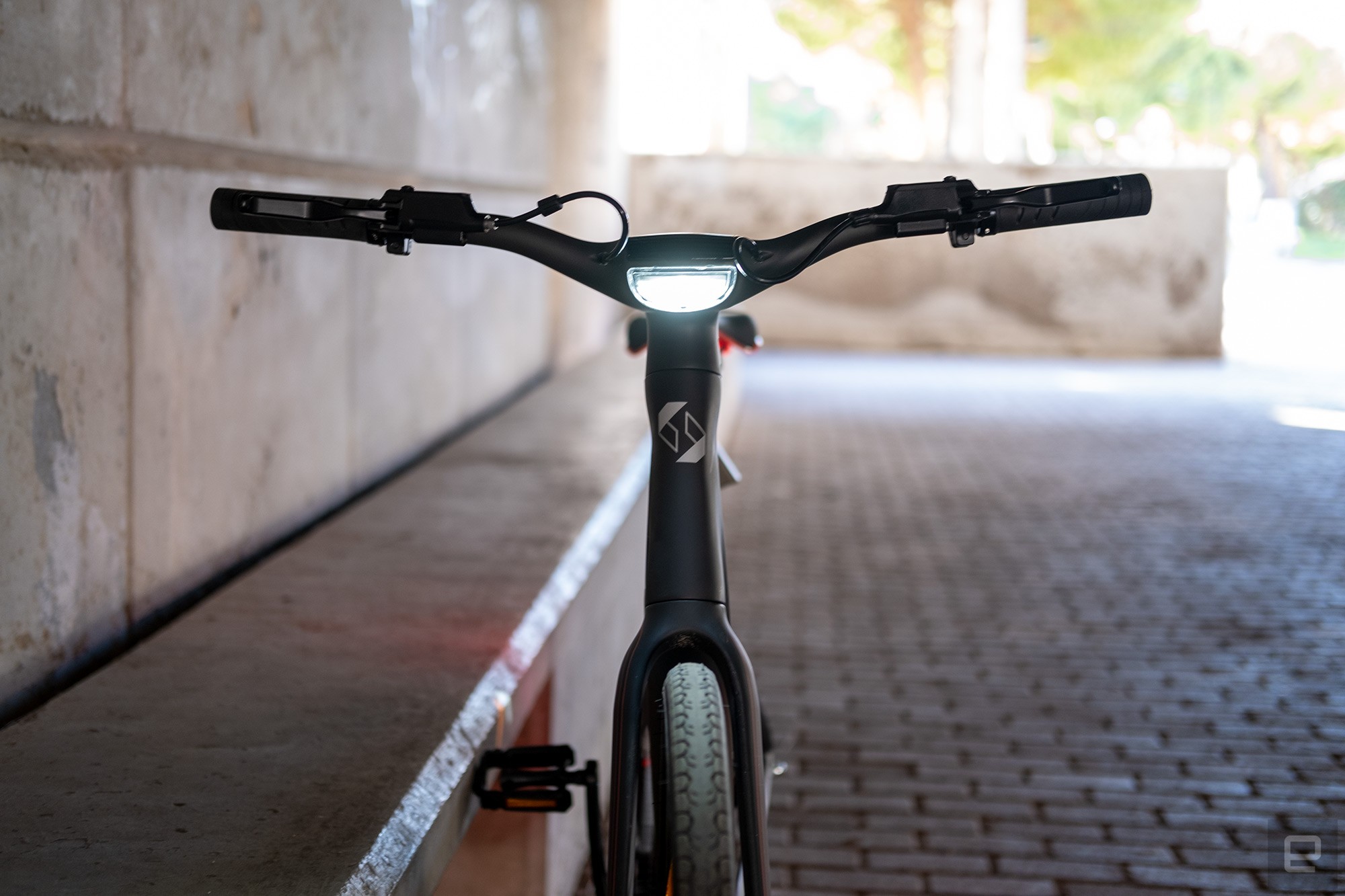 The experience with the alarm also needs a little smoothing out. I love the idea that I can leave the bike “locked” and if anyone moves it, it’ll issue an audible alarm. The problem is, the Urtopia will do this any time it’s locked. This might seem fine until you learn that “locked” is basically “standby” and the bike will be in this mode as soon as you connect the battery. So if you put the battery in and then start wheeling the bike out the front door, the alarm will sound.

There’s an easy fix for this, but also not entirely helpful. Simply turn the bike on and that will disable the alarm. In fairness, this is a quirk of it being a prototype. Production models will allow you to disable the alarm with the fingerprint sensor or the companion app, but this isn’t something I could test. It’s worth mentioning that, right now, there’s no actual way to turn the bike off other than by removing the battery, so fingers crossed these are some kinks that can be ironed out by launch. I asked a company representative if this was the plan and he confirmed that it was.

So, tech aside, what does this thing ride like? The sitting position puts you leaning forward in more of a racer pose than a typical town bike where you might be more upright. It’s comfortable though, even after mid to long rides (the longest I managed was 11 miles but I was up for more) although the Velo saddle could be a little easier on the butt — it’s fairly hard and doesn’t appear to be gel-lined.

In pedal mode, there’s no noticeable resistance from the motor as expected with a hub of this type. At 13Kg/30 pounds, it’s pretty light for an e-bike — mostly thanks to the carbon fiber body. This means if you don’t want to use the battery it’s still a functional regular bike. Tap up on the D-pad though and things get fun real quick. Like most e-bikes, the Urtopia is limited on its power assistance based on territories. The US version tops out at 20 MPH before you’re on your own and the EU version will cap out at 16 MPH of electric assistance. 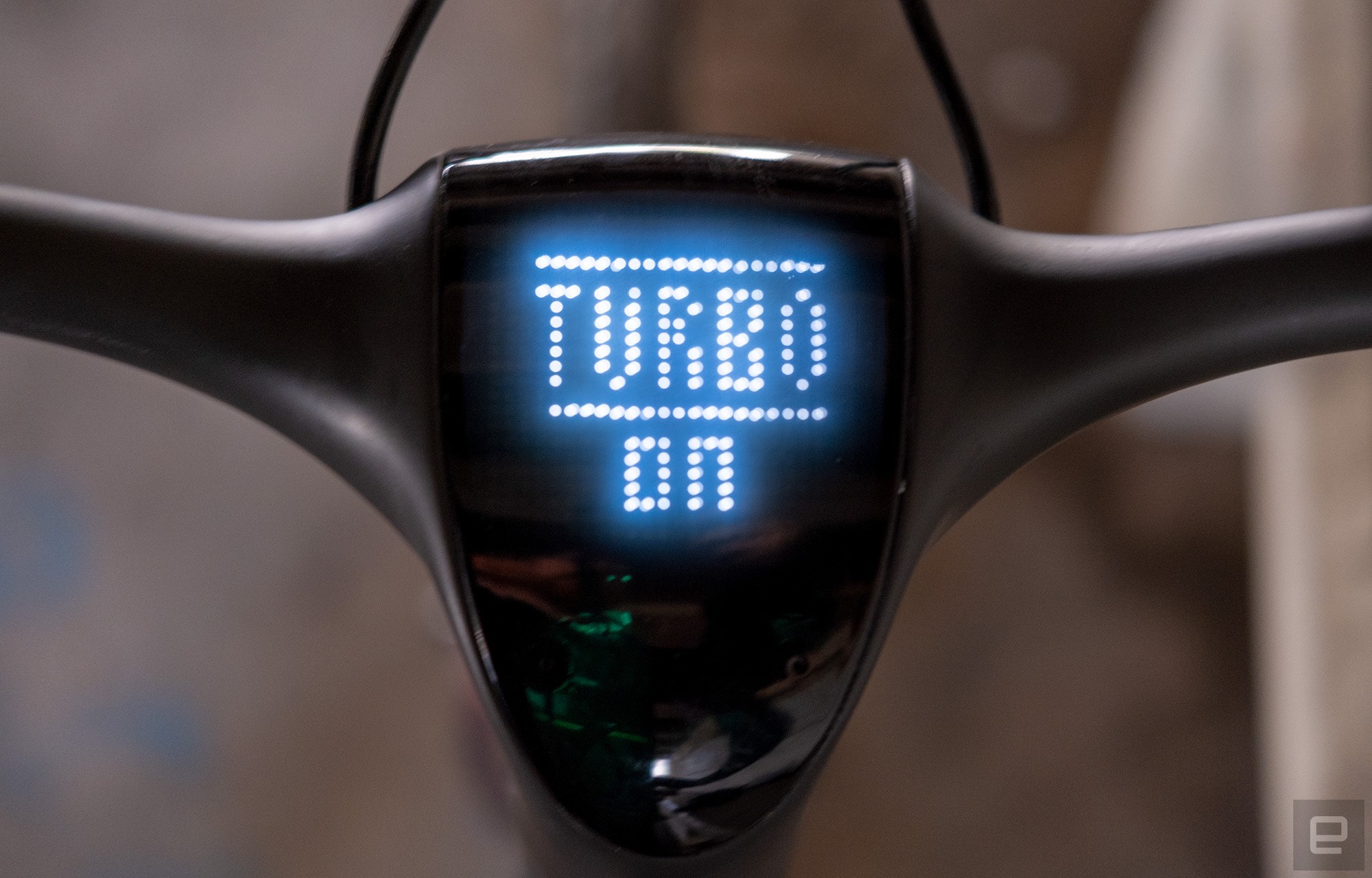 The three power modes all feel pretty fast. That’s to say, even “eco” mode will help you along nicely. Step up to Comfort mode and you probably have nearly all the power you need to get where you’re going and have a good balance of exercise and assistance. In Sport mode, this thing feels really quite fast despite the standard limitations. I often found myself dropping back down to Comfort mode when other humans were near as it can feel quite lively — in a good way.

If you really are feeling like chilling out and letting the bike do all the work, there’s also that Turbo mode. Long press Up on the D-pad and even the lightest of pedaling will soon get you to 20mph. Given the racey aesthetic and the forward seating position, this is a lot of fun for not a lot of effort.

With that in mind, I should mention the range. Urtopia claims you should be good for anything between 30 and 80 assisted miles. This will obviously depend on the terrain and which power mode you’re in, and it’s quite a wide estimate. I haven’t run the battery down yet, but the indicator on the smartbar did seem to get quite low even on a 10-mile ride. It’s hard to know if this is a prototype quirk or just that the battery is draining fast (which, again, could be something that changes in final hardware with final firmware? Hard to know).

This is why I saved the section on GPS and the 4G connectivity until now. One of the more interesting selling points here for me is that you will be able to track and locate the bike on a map at almost any time. The company tells me it plans to offer data bundles for the 4G connectivity for about $30 a year — which seems pretty reasonable for the peace of mind of being able to locate your bike anywhere if it were to go missing. My question is… what impact might this have on the battery if it’s pinging GPS and running 4G while idle? Alas, a question I can’t answer until we get to try the final model.

The same question goes for the mmWave sensors. Another thing I am currently unable to test. 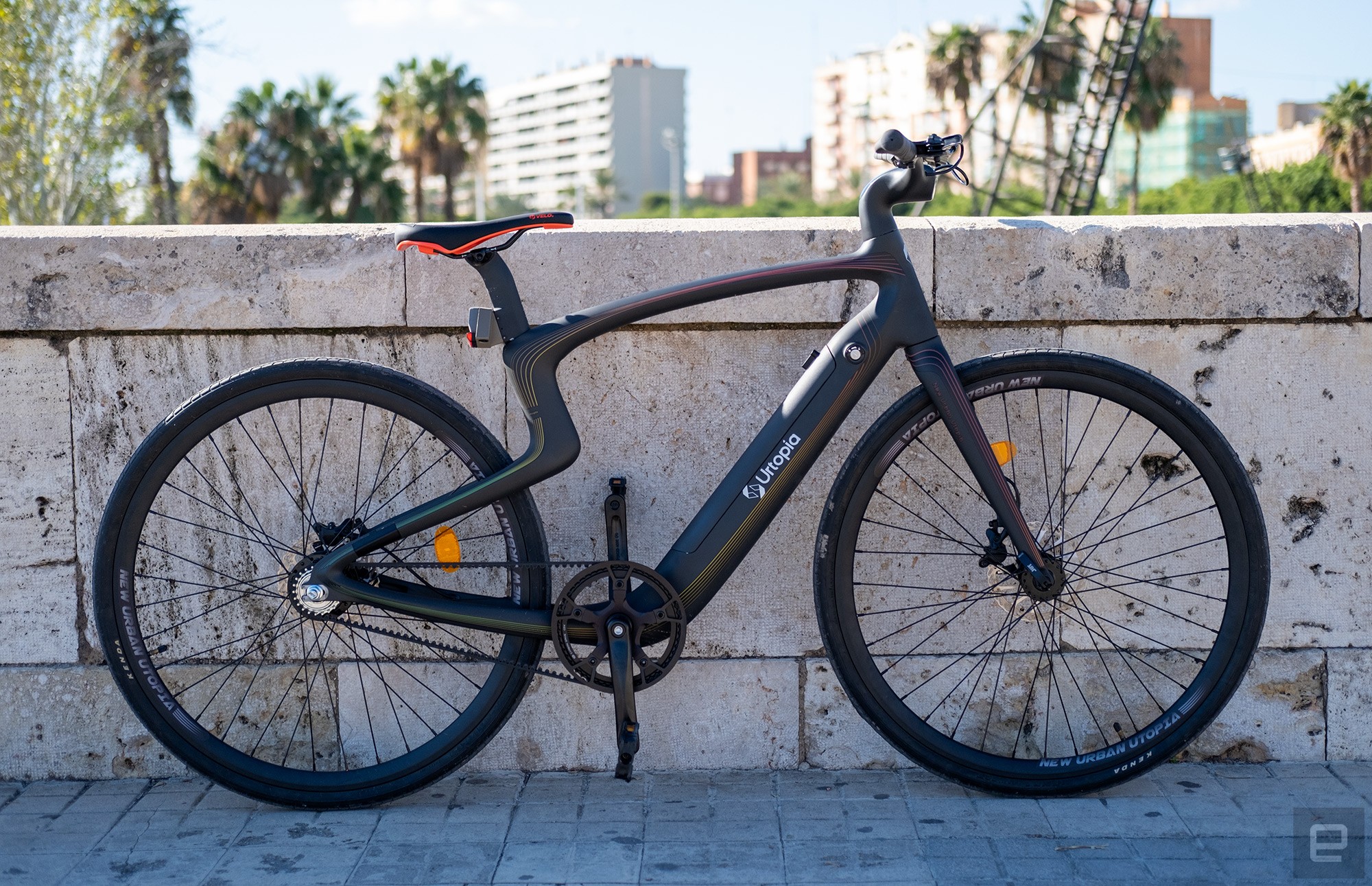 What I do know is that as the bike is right now, it’s incredibly fun to ride and thanks to the weight, fairly easy to handle (I live in a fifth-floor apartment, so wrangling it into the small elevator is thankfully more manageable). The techno styling might not be to everyone’s taste, but I’m quite fond of it. And most importantly, it’s nice to see something so tech-forward, even if some of the headline features weren’t ready. I am eager to try them once they are and after speaking with the company I got the sense there is more to come. I jokingly suggested they should allow music through the smartbar speaker (the bike has Bluetooth) and they suggested that was possible as are the required OTA updates to deliver such new features.

Right now, the Urtopia is available for pre-order via Indiegogo. As such, the standard caveats apply, but given how close to final the prototype I have is, it doesn’t seem like there’s any more development to be done, just some fine-tuning on those remaining features. If you do pre-order you’ll be able to pick one up for $2,000 which is a really competitive price even for the bike without those extra features enabled. According to the campaign, that price will almost double once it goes to retail, so if you’re taken by what you see, there’s a decent incentive to get on board sooner rather than later.