Traeger is one of the biggest names in backyard grilling. The company's line of pellet grills offers WiFi connectivity and other handy features across the board starting at $900. After churning out new smart models in both 2018 and 2019, the company hasn't debuted a new grill in about three years. Instead, it focused on redesigning its app to include recipe guidance and video tips along with an Apple Watch version and recently introduced Traeger Provisions meal (read: feast) kit service. For grilling season 2022, though, Traeger has completely redesigned its premium model, the Timberline.

And a lot of those upgrades relate to the tech. First, Traeger touts "an entirely new level of performance" thanks to a new smart combustion system. With added sensors, the grill monitors the cooking area to prevent pesky flare-ups for consistent results. The company has also swapped out the old black and white display for a full-color touchscreen unit. Not only does it offer a more modern look, but the screen can show a guided setup in addition to monitoring time and temperature. What's more, Traeger has built in a maintenance check where the grill can self-diagnose issues and guide you to customer service or replacement parts via a unique QR code.

You won't have to worry about the Timberline pulling cooking power for that display either. Traeger says dual controllers handle the cooking and the screen separately, and the display has its own dedicated graphics processor. The new controller automatically detects Meater's wireless food probes and the new Timberline comes with two of those accessories (you can use up to four at a time). In case you missed it, Traeger acquired Meater last summer, so this integration was inevitable. The only caveat is you have to use the probes designed for the new Timberline grills. Previous versions from Meater aren't the same so they won't work here. If you prefer wired probes, you can still use those on these new models. 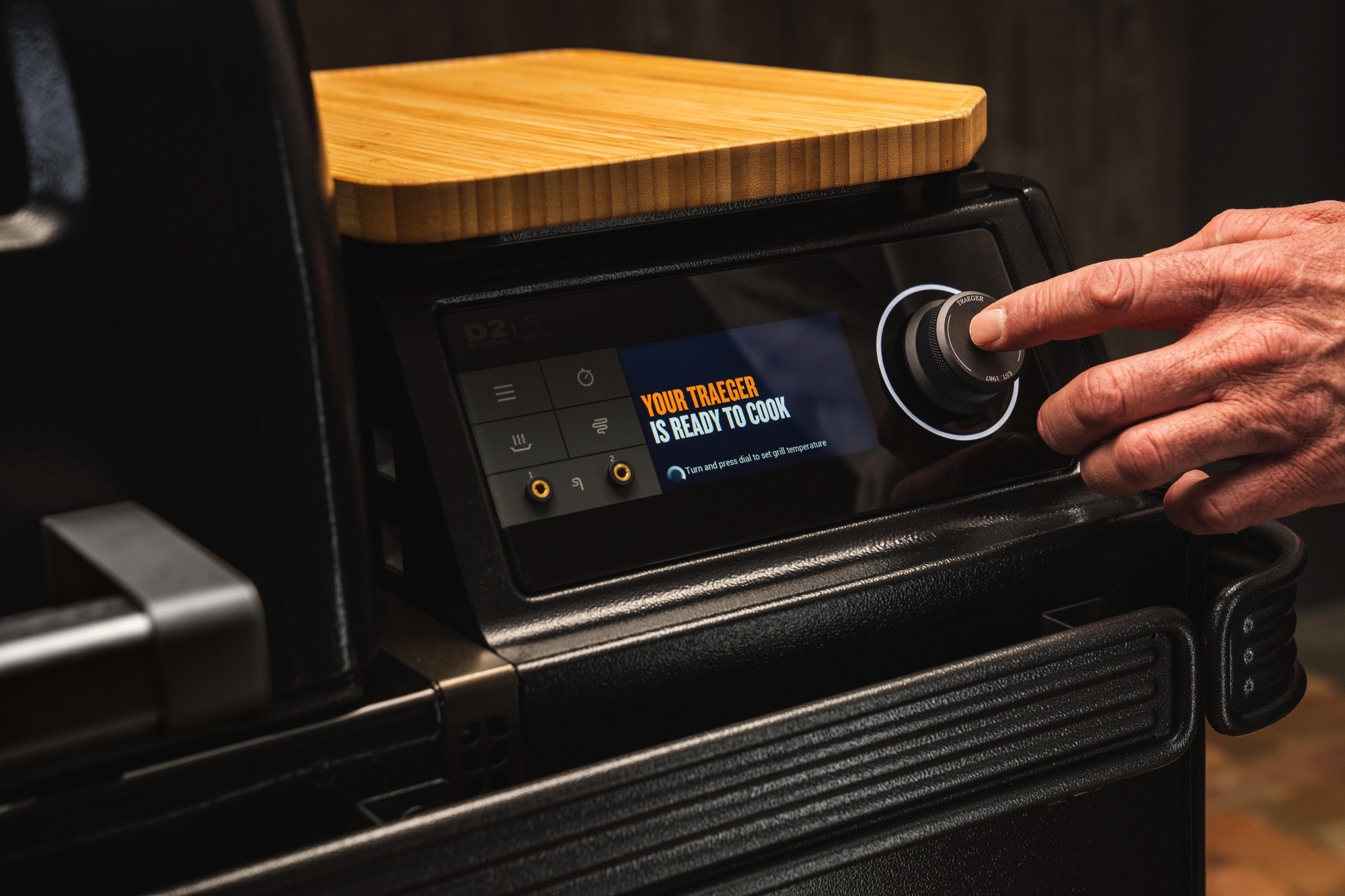 To help with sauces, frying, searing and other tasks, the new Timberline grills have a side burner. Sure, a lot of grills have that extra burner, but they're not common on pellet models. More specifically, Traeger says this Timberline features the first outdoor-rated induction burner for both precision and power. It should especially be handy for fans of the reverse sear as it will heat up much faster than trying to get the entire grill up to 500 degrees Fahrenheit or higher after a quick smoke.

Plenty of grills offer lighting to help you see at night, with Weber being one of the biggest names to do so. Until now, Traeger hadn't included built-in illumination, but the new Timberline has it. The company's vice president of product Michael Colston explained that Traeger spent a lot of time researching where the best location for the lights should be so that smoke doesn't interfere with visibility. Instead of putting lights inside the smoke chamber, it positioned them on the outside, so it can be activated by a lid sensor and it won't get smoked up while lighting the entire cooking surface.

"We've thought about where that light needs to be placed," he told Engadget. "It also signals to the controller that the door is open and barely keeps the smoke going." So when the lid is up, the grill is no longer working to produce the same level of smoke as when it's closed. It's also not trying to recover from the drop in ambient temperature before you're ready for it to do so. 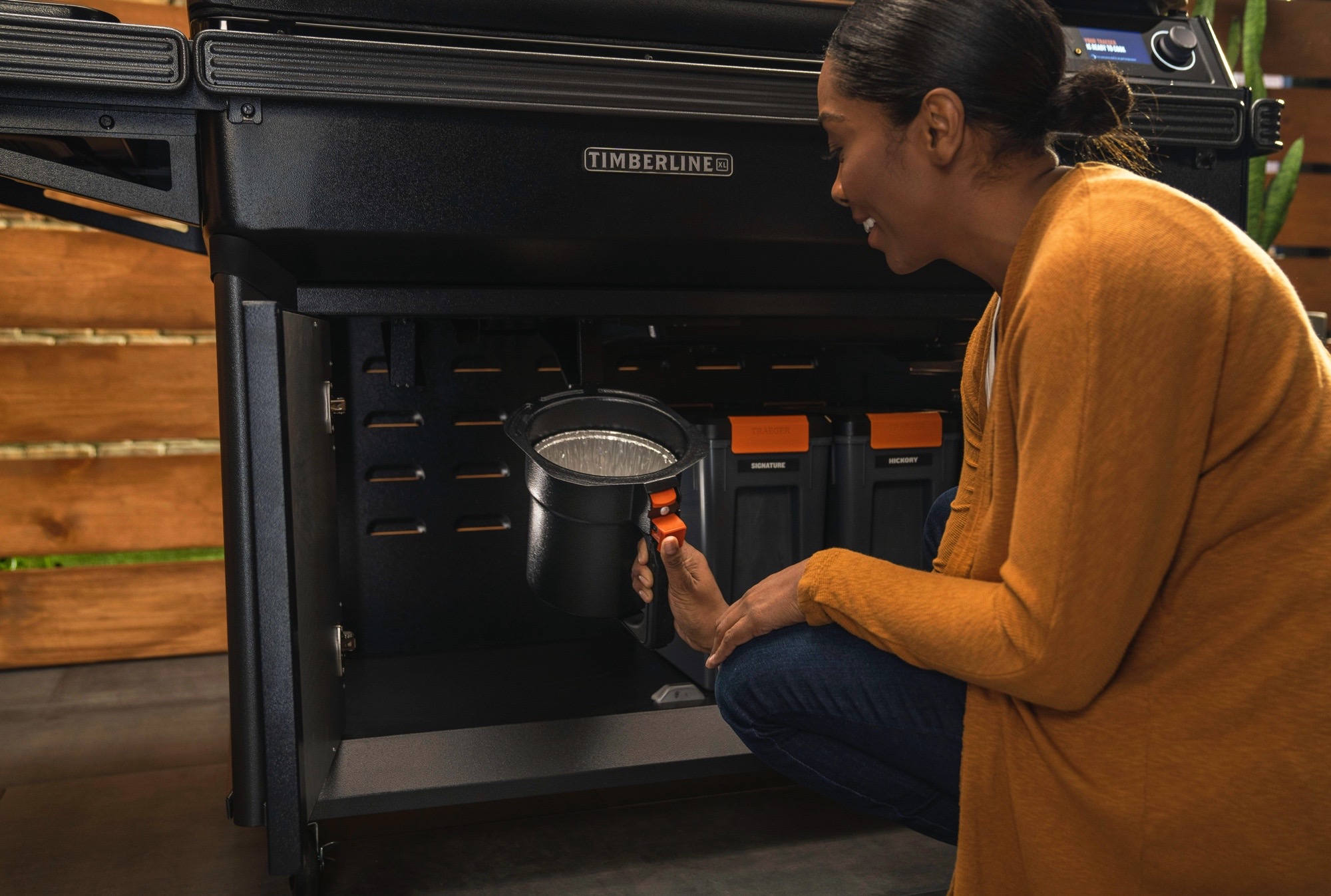 Inside, a new grease and ash collection system sends all of the waste out of the bottom instead of rolling grease to a small pan on the side. Colston described the Timberline as "nearly self-cleaning" since a new FreeFlow firepot ejects the ash over to what Traeger calls the EZ-Clean Grease & Ash Keg. New plates channel grease to the same receptacle where gravity carries over wood pellet ash and debris. Besides putting all the waste in one spot, this new setup also means you won't have to break out the shop vac as frequently to clean up. Colston explained he's been using a new Timberline for months and probably could've gone longer without vacuuming out the inside. If the description is accurate, this will alleviate a key headache with pellet grills.

Instead of a four-post support for the new Timberline, Traeger opted for a cart stand like you typically see with gas grills. This offers more storage via a cabinet and small shelves below the pellet hopper. The company also designed what it calls the Pop-And-Lock (P.A.L.) rail system for accessories — things like an adjustable roll holder (paper towels, foil or butcher paper), tool hooks and a basket for rubs/sauces. The rails wrap around the front and sides of the grill, but not the back, so you have some room to move things as needed. Traeger relocated the pellet hopper cleanout chute to right below the hopper, so it's accessible from the front. The cart was designed so you can easily slide in a storage container and empty pellets between cooks. So not only are you able to keep your fuel fresh, but you might also be more likely to use different types of wood instead of sticking to your go-to variety (read: buy more pellets).

The new Timberline should also offer more consistent performance in chilly weather thanks to full stainless steel insulation and a multi-level heat delivery system that wraps the cooking area in radiant warmth. Traeger says all of this creates hotter temperatures at the grates for better searing and improved overall heat regulation.

Traeger designed the new Timberline so it can be installed in an outdoor kitchen's countertop setup. A trim kit can be purchased for a finished look and you can install the induction side burner off to the side of the grill as well. Lots of Traeger users have built outdoor setups with counters and bigger carts by removing the legs that come with the grills, so the company is catering to those folks by designing its latest model so that this process is relatively easy. 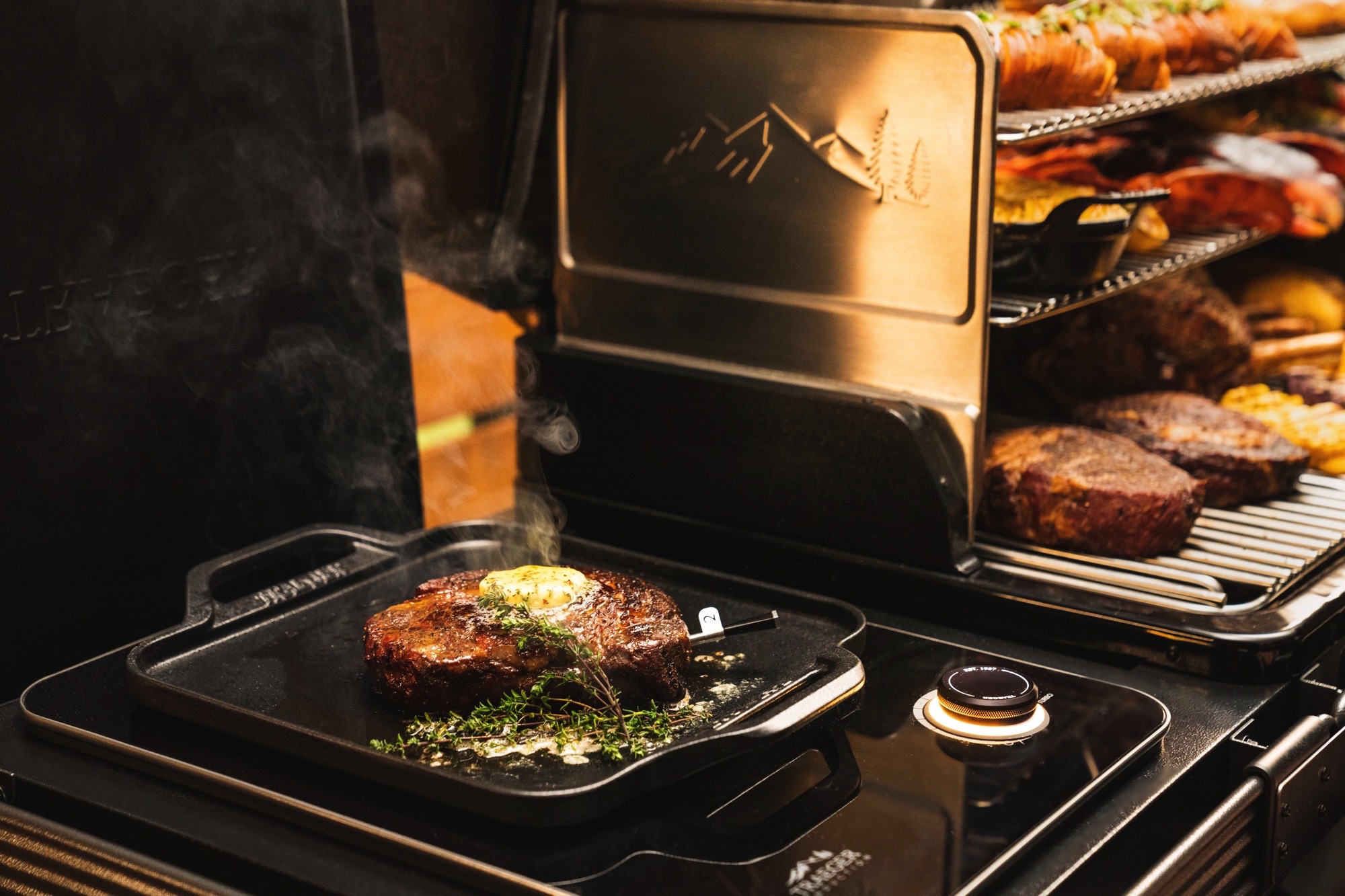 Even if you don't want a full kitchen on your patio, the company has more accessories to add other culinary capabilities to the Timberline. With ModiFire products, you can purchase a stainless steel fish/veggie tray or a griddle for the induction cook top. The company says a two-sided griddle for use inside the grill is coming this fall alongside pizza stone and cover system that has its own sensors and cooking algorithm.

Despite all of the new stuff, some old favorites are still here. The Timberline is still powered by Traeger's D2 platform and WiFire wireless connectivity. The company's app still provides step-by-step guidance, video tutorials and a wealth of recipes, in addition to giving you control over every grill setting except for pressing the ignite button to get things going. And yes, you can use it to control that new side burner with the app too. The company has swapped out the WiFi antenna for a 360-degree component is says is more powerful that what was on previous models. Super Smoke mode is also back for low-and-slow cooking, but Traeger says it's capable of even more flavor with that new firepot that can churn out more smoke.

The new Timberline and the larger Timberline XL will sit at the pinnacle of Traeger's product lineup. Both models will be available this spring for $3,499 and $3,799, respectively. For comparison, the previous-gen Timberline 850 and 1300 are $2,100 and $2,300, so you'll have to pay quite the premium for all of the upgrades the company has added to it's high-end models.