Want to spend your evening making a TikTok filter that turns your hair blue? Or how about one that morphs your face into an iguana? As Wired wrote in 2020, an AR filter is “neither high art nor high comedy, but it’ll do for a few seconds’ worth of glee.” And now that TikTok’s “Effect House” tool is out of beta and is open to “all creators, designers, and developers from around the world,” filter fans are in luck.

In an announcement, the company says the effects platform will allow creators to make AR camera effects that can be used by other TikTok users. “Whether you’re teleporting into new worlds with Green Screen or freeze-framing with Time Warp Scan, creative effects empower creators to express themselves, entertain, and share stories through a wide array of engaging and immersive formats,” the company writes.

To use Effect House, you’ll just need to download a 453 MB file onto your desktop. The tool’s UX is very similar to that of Lens Studio from Snap, released in 2017, and Spark AR from Meta, released in 2019. TikTok has published how-to guides for creators and hopes to build an AR community in its official Effect House Discord.

Watch out for misuse — Like Snapchat and Instagram, TikTok will require submitted effects to receive formal approval before they’re available for use. The company specifically says it will prohibit effects that “promote colorism or negative stereotypes against protected groups” or “depict cosmetic surgery.”

For a platform that already struggles with moderation, reviewing each filter is quite the undertaking. In the past, Instagram has struggled to effectively moderate its million-plus AR filters, letting “too many blackface filters to count” occupy its platform, according to AR filter designer Mingus News. 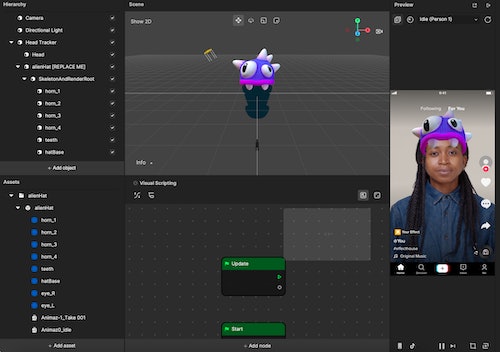