Sony debuted its latest flagship Dolby Atmos soundbar in July. The HT-A7000 is also the first of the company's soundbars to support 360 Reality Audio. The device is premium in every way, from connectivity options that include both 8K and 4K/120fps passthrough right down to the $1,300 price tag. If you don't want to spend that much, but still crave the same features, Sony announced another home theater speaker today. The HT-A5000 is a 5.1.2-channel soundbar that offers nearly all of the same bells and whistles as the A7000, but for $400 less.

In addition to Dolby Atmos, the A5000 also supports DTS:X, and Sony's Vertical Surround Engine simulates audio above your head thanks two a pair of upward firing drivers. S-Force Pro Front Surround creates a wider soundscape horizontally, using the company's X-Balanced speakers and "digital sound field processing" tech in an attempt to make things more immersive. In terms of the actual speakers, the A5000 has seven of those X-Balanced drivers: two up-firing, three front-firing, two built-in subwoofers. The soundbar also packs in a pair of beam tweeters situated on the front corners of the device. If you happen to own a compatible Bravia TV, Sony offers a Center Speaker Mode that uses the television speakers to boost the center channel. The company says that this can help with things like dialog and a secondary wired connection to the TV ensures sound and visuals are in sync.

To properly calibrate the A5000 to your living room, Sony's Sound Field Optimization feature uses built-in microphones to measure speaker position in relation to the walls and the ceiling. This tool can also assess the position of any satellite speakers or a subwoofer to ensure the system is properly adjusted for the space. 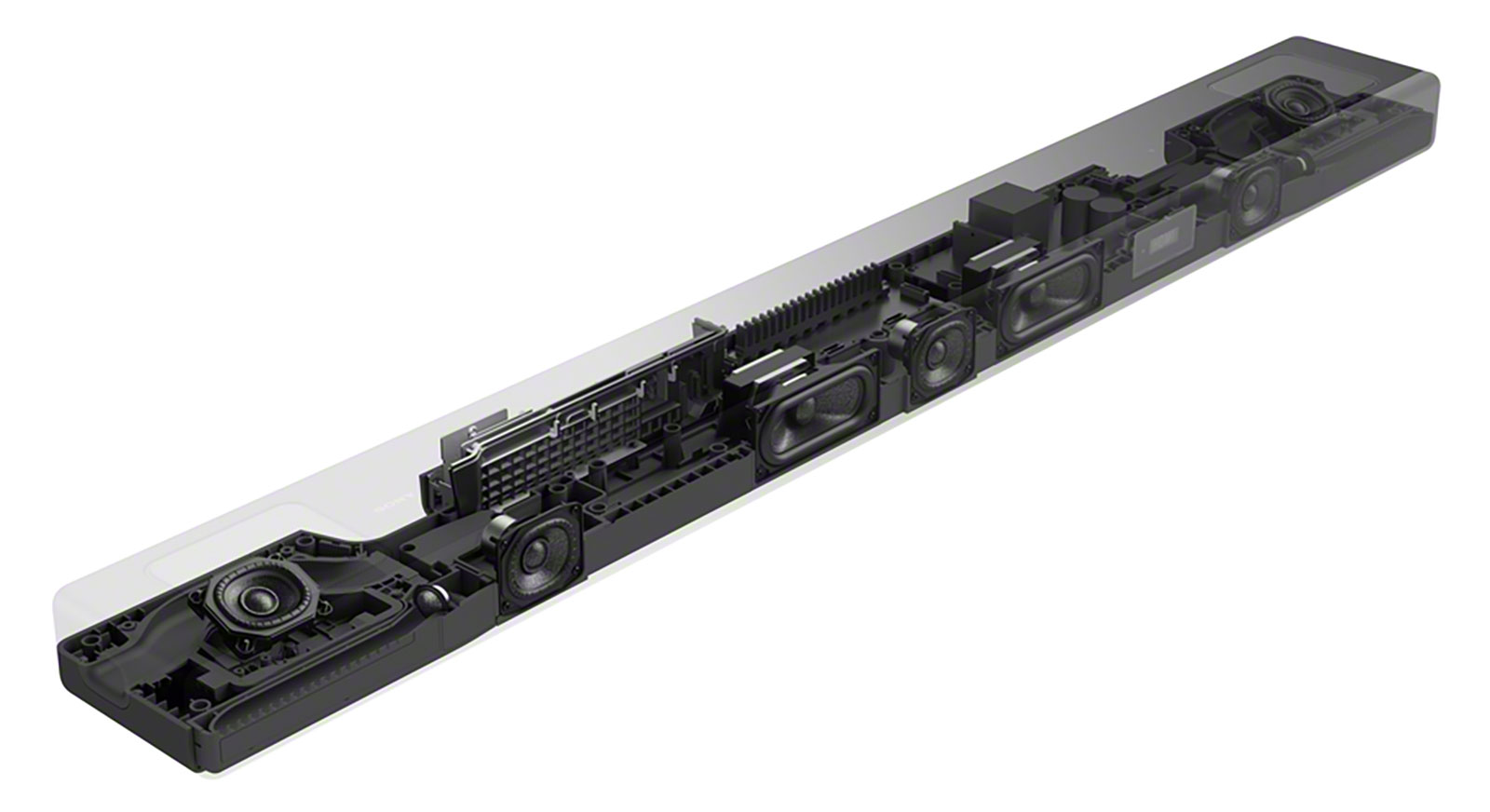 For connectivity, a single HDMI eARC output allows for 8K HDR, 4K/120Hz and Dolby Vision passthrough, making the A5000 a worthy option for gaming in addition to movies and television. The soundbar also offers AirPlay 2, Chromecast, Spotify Connect, Bluetooth and WiFi for wireless connections, in addition to Alexa and Google Assistant for voice control via a separate device. The A5000 is compatible with Hi-Res Audio content and it employs Sony's AI-powered DSEE Extreme technology to upscale compressed files in real time, restoring someof the detail that's otherwise lost. 360 Reality Audio is available for use here via Amazon Music HD, Deezer, Tidal or nugs.net.

There are a few key differences between the A7000 and the A5000. First, the former is a 7.1.2-channel soundbar while the latter is 5.1.2. Depending on your sonic preferences, those two extra channels and two extra speakers may make a difference in immersive sound. Typically, more channels and more speakers means better audio quality and more detail, but some folks may be just fine with a 5.1.2 setup. On the A7000, the tweeters are positioned in a way so that they bounce sound off the side walls to help with the overall immersion. Lastly, the A5000 only has one HDMI 2.1 (eARC) input and the A7000 has two. From supported audio formats to Sony's various home theater tech, nearly all of what the A7000 has to offer is available on the A5000.

Like the A7000, the A5000 works with Sony's latest arsenal of satellite speakers and subwoofers. The company announced two subwoofer options, the SA-SW5 and SA-SW3, and a pair of rear satellite speakers (SA-RS3S) as separate add-ons when it debuted the A7000 in July. All three connect to the HT-A5000 wirelessly. The difference between the two subs is the SW5 packs 300 watts of booming bass via a 7-inch driver and the SW3 offers 200 watts of low-end tone with a 6-inch speaker.

The HT-A5000 will go on sale "in early fall" for $900 at Sony retailers. The SA-SW5 and SA-SW3 subwoofers are $700 and $400 respectively, while the SA-RS3S satellite speakers are $350. All three of those expansion items should be available in September or October alongside the A7000. Sony hasn't yet announced exact dates for any of this new home theater gear just yet.