Ring announced new features for its Ring Protect Basic plan, such as more alert options, exclusive discounts (10%), up to 50 video downloads (up from 20), and 180 days of video (up from 60), plus a ton of “coming soon” features (smart alerts for cars, animals, alerts for breaking glass and open doors). However, with these new upgrades, the price of the Protect Basic plan is increasing starting in July to $3.99 a month or $39.99 a year in the U.S.

Ring shared the news in a surprising note this week, sharing that existing customers will see the new features on July 1, and will experience the price jump whenever their subscription renews. 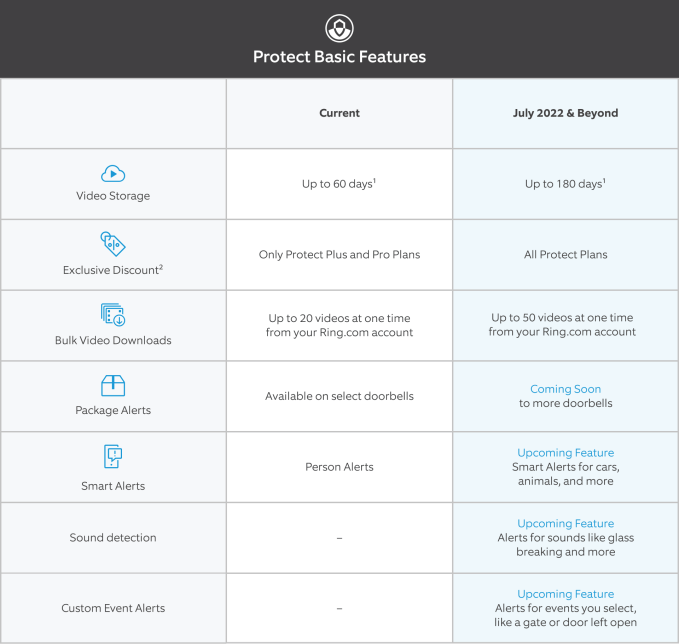 The Ring video doorbell launched in 2015 as one of the first video doorbells on the market. Two years later, Ring’s cheapest security camera subscription plan was introduced and has stayed flat at $3 per month ever since (well, until this week)

The 99-cent increase has some users understandably aggravated, especially those who don’t care for the new features.

Just had the email from @ring telling of a 40% price increase for a pointless additional service that residential doorbell owners just don’t need. Will also be cancelling asap. Well played!

@ring just cancelled subscription due to price increase. Shame, the increase suggests improvements but it should only happen when customers renew. Not mid contract.

Basic plan subscribers who own more than one device will also be annoyed since if you have the Basic plan and own two or three devices (doorbell, nursery camera, in-home drone, etc.), you will now be asked to pay another $20 or $30 a year. Some subscribers used to get around the second-tier cost by tripling subscriptions to cover each camera, which would only bring their monthly fees to about $9/month or $90/year for three separate cameras.

With the price increase, they will be forced to pay the full fee for all three or to save money and subscribe to Protect Plus. The Protect Plus plan covers all Ring devices and costs $10 a month or $100 a year. In the press release, the company stated, “The price change will not affect Ring Protect Plus and Pro plans, which include the same features as Basic and more.”

Many basic Ring features like two-way talk, motion-activated notifications, and the live real-time camera view don’t require a subscription to work. Therefore, it’s likely that users will opt out of these subscription plans that have unappealing features to some buyers and stick with fewer capabilities for no extra fee.

Ring is one of the top-selling security systems in the U.S., so it’s no surprise that people are angry about the price hike.