A previously unknown Seattle startup, founded by semiconductor and technology industry veterans, says it has developed an energy-efficient chip capable of running advanced AI applications on lightweight, wireless augmented reality headsets that will operate all day without recharging.

The company, Ixana, says devices that incorporate its chip will give users the equivalent of a “wearable brain” — sensing and analyzing the person’s environment, and providing real-time information about everything from inventory on a warehouse shelf to a previously forgotten acquaintance at a party.

By enabling all-day battery life in lightweight wearable devices, Ixana says its proprietary YR11 chip represents a key advance that larger companies including Apple, Microsoft, and Meta have yet to achieve (or at least publicly unveil) in their own work on augmented reality, AI, and wearable technology.

Ixana has raised $3 million in funding from Uncorrelated Ventures, Samsung Next, Evonexus, Hack VC, and angel investors including Tom Chi, who led early development of the Google Glass AR headset. The chip has also benefitted from more than $3.5 million in government grants from the National Science Foundation and others.

The company declined to disclose details of the underlying physics of its chip, which it says has resulted in a 100x improvement in energy efficiency, but said it relates generally to the way the chip distributes computing beyond one location to spread out the computing load, dissipate heat, and reduce battery drain. 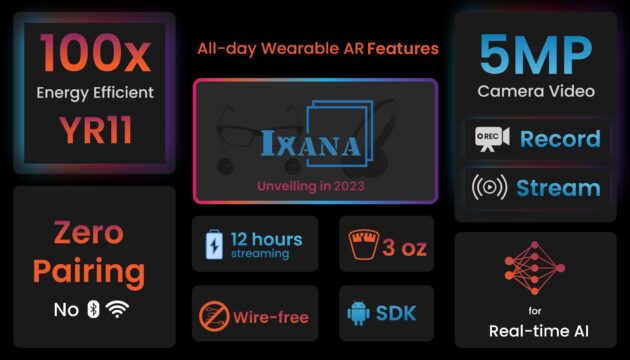 An Ixana graphic describes the features of its YR11 chip and reference hardware design.

Ixana is promising to provide more information and demonstrate the chip in early January at the CES trade show in Las Vegas, including an augmented reality reference hardware design that will be on display at its booth.

The company was founded in late 2020. It has a team of 17 people with past experience at companies including Intel, Qualcomm, Silicon Labs, Ford, Goodix, Rambus, and Texas Instruments.

“The key problem we’re trying to solve is making sure that our brains and machines can interact faster, so that we can get feedback from the machines in real time,” said Angik Sarkar, the company’s CEO and co-founder. “Essentially, the machine becomes an extension of you. We sometimes call this a wearable brain.”

Shovan Maity, co-founder and head of research for Ixana, was previously an engineer for Intel and Qualcomm.

Now in its fourth generation, the chip was developed by Ixana’s team, and fabricated by Taiwan Semiconductor Manufacturing Company (TSMC). While some components of the headset are sourced from China, the company says all customer-facing components are sourced and assembled in the United States.

Ixana says industrial customers are already testing headsets that incorporate the chip in warehouse settings. The company says it plans to launch larger testing and validation of its chip and reference headset design next year.

The company is also planning to release an Android software development kit (SDK) that developers will be able to use to run their own machine-learning models on the headset to capture data for real-time feedback.