A new benchmark leak reveals that MediaTek’s Dimensity 9200, which is said to be the name of the company’s upcoming flagship smartphone SoC, has beaten Apple’s M1 running in the fifth-generation iPad Pro. The unreleased chipset is said to feature ARM’s powerful Cortex-X3 core and will likely be mass produced on TSMC’s 4nm process.

The AnTuTu benchmark leak was shared by Chinese tipster Digital Chat Station, claiming that the final score belongs to the Dimensity 9200, which also features an Immortalis-G715 GPU. The newly designed graphics cores paired with the Cortex-X3 deliver a final score of 1,266,102, beating the M1 iPad Pro, which, according to AnTuTu’s rankings, obtained an overall score of 1,251,547.

The tipster says that the test was carried out at room temperature, which is typically around 20°C, and according to the test, the chipset’s highest temperature did not exceed 37°C, maintaining a consistent 36°C. These low temperatures indicate that the device used to test the Dimensity 9200 was likely equipped with an improved cooling solution, and TSMC’s efficient 4nm process also played its part to perfection. 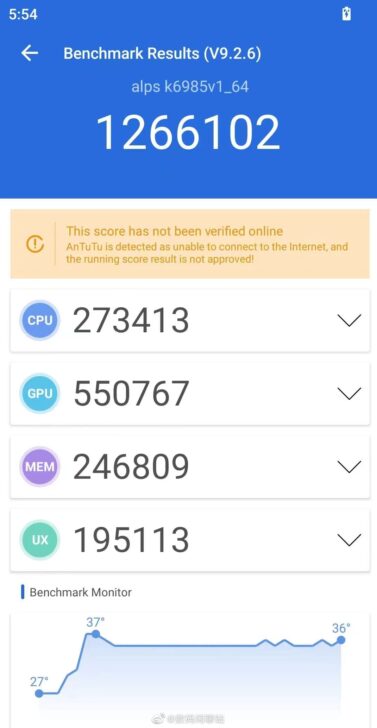 Earlier, the Snapdragon 8 Plus Gen 1, which is mass produced using the same 4nm architecture, managed to best Apple’s A15 Bionic in a gaming test, showing what a mammoth difference can be achieved by switching foundries. It will be interesting to see how the Dimensity 9200 fares against the upcoming Snapdragon 8 Gen 2, which is also rumored to be fabricated using TSMC’s 4nm node. It is worth noting that for some odd reason, AnTuTu favors Android chipsets compared to Apple’s A-series or M-series custom silicon.

Time and time again, we have seen Apple’s chipsets beat the competition in various single-core and multi-core workloads, so perhaps when the Dimensity 9200 is tested using other applications, we will get a clearer picture. After all, it is no easy feat beating the M1, which was designed for various MacBook models, followed by the iMac, before making its way to the iPad Pro. Here you have a smartphone SoC besting a silicon meant for larger machines, so we must see more numbers before passing a final verdict. For now, these are impressive results.