Shortly after the Snapdragon 8 Plus Gen 1 went official, MediaTek decided to save precious time and proceed with its Dimensity 9000 Plus launch. The slightly powerful version of the Dimensity 9000 boasts improvements in the CPU and GPU, and we will be discussing those details below.

MediaTek Aims to Squeeze Every Bit of Performance as It Can From the Dimensity 9000 Plus, but Those Improvements Are Minor

Like the Dimensity 9000, the Dimensity 9000 Plus is built on TSMC’s 4nm architecture, so smartphones bearing the new SoC will see power efficiency improvements. Eight cores are present in the latest silicon, with the Cortex-X2 witnessing an increase in clock speeds. However, the remaining cores are running at the same frequency, and if you want to see a breakdown of all cores, those details are as follows.

According to MediaTek, the new chip offers a 5 percent CPU performance increase, with the GPU delivering a 10 percent gain compared to the Dimensity 9000. This improvement immediately means that the Dimensity 9000 Plus is already faster than the Snapdragon 8 Gen 1, so it remains to be seen how well it stacks up against the Snapdragon 8 Plus Gen 1.

“Building on the success of our first flagship 5G chipset, the Dimensity 9000+ ensures that device makers always have access to the most advanced high-performance features and the latest mobile technologies, making it possible for their top-tier smartphones to stand out.” 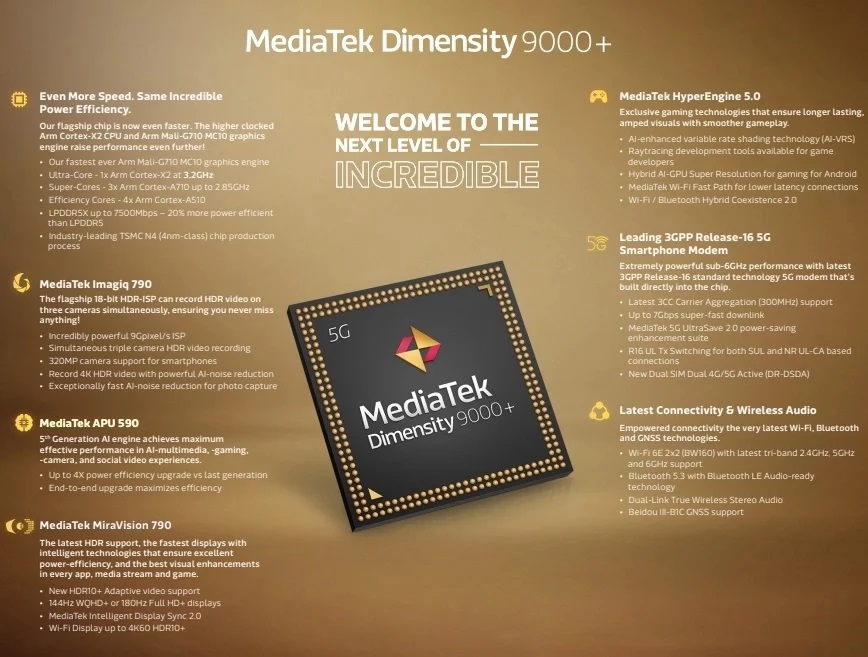 Other features of the Dimensity 9000 Plus remain unchanged compared to the Dimensity 9000, and that includes the 7Gbps maximum downlink speeds of the 5G modem. There is also support for LPDDR5X, up to 7500Mbps, and the intelligent fifth-generation APU 590 delivers four times the power efficiency compared to the previous-generation version. Coming to the camera, the new silicon has an 18-bit HDR ISP that can record 4K HDR video on three sensors simultaneously.

Additionally, there is support for up to a single 320MP camera. Regarding connectivity, the Dimensity 9000 Plus supports Bluetooth 5.3, with BLE Audio-ready, Wi-Fi 6E 2x2, Wireless Stereo Audio, and Beidou III-B1C GNSS support. MediaTek states that the first wave of premium smartphones arriving to the market with the new SoC will be in the third quarter of 2023.

In the coming weeks, we will see how well the Dimensity 9000 Plus performs and give our readers some much-needed updates. So far, what do you think of these improvements? Tell us down in the comments.