Though it was teased earlier this year, Impossible Foods officially launched its plant-based “chicken” nuggets today. Mostly made out of soy protein and sunflower oil, the “Impossible Chicken Nuggets” will initially be available in select restaurants across the country, and then sold in grocery stores in the frozen aisle later this month.

Some of the restaurants that will be serving the Impossible Nuggets include David Chang’s Fuku in New York City, Marcus Samuelsson’s Red Rooster in Harlem and Miami, Sean Brock’s Joyland in Nashville, Tal Ronnen’s Crossroads Kitchen in Los Angeles and Traci Des Jardins’ El Alto Jr., a new pop-up at State Street Market in Los Altos, California. Regional chains such as LA-based Fatburger and Bay Area-based Gott’s Roadside will also add the nuggets to their menus this week.

I tried out the nuggets a few days ago at the Gott’s Roadside located in the Ferry Building in San Francisco. They were absolutely delicious, with a crispy well-seasoned breading and a juicy, moist interior. Fresh out of the fryer, they definitely tasted better than the “chik’n” nuggets from the likes of Gardein or Boca Burgers. They didn’t taste exactly like chicken either, but they were close enough that I didn’t mind. In fact, when dipped in various sauces (Gott’s serves them with ranch, ketchup and honey mustard), they were indistinguishable from the real deal. 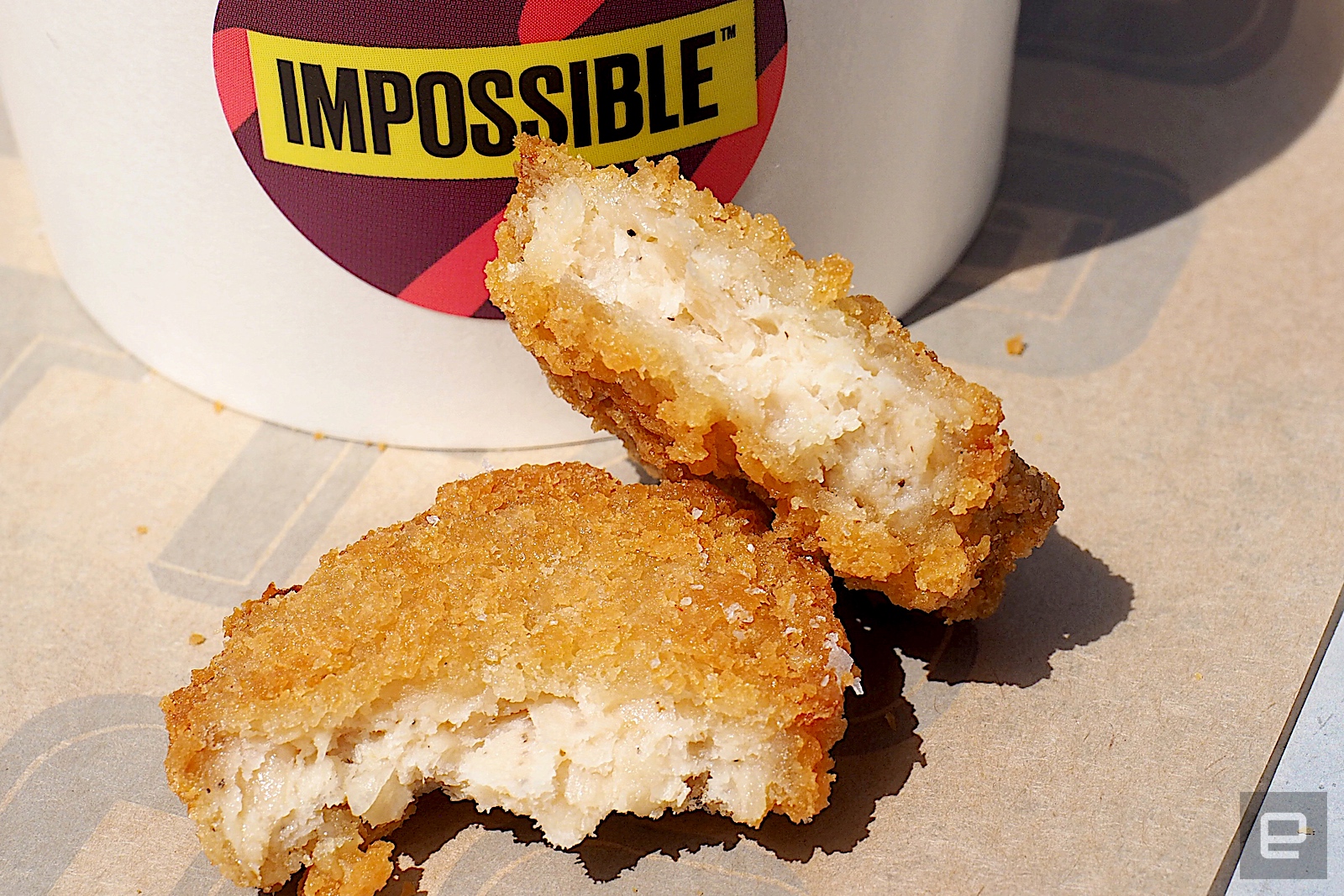 According to Impossible, the nuggets have 40 percent less saturated fat and 25 percent less sodium than animal-based chicken nuggets. “Our technology platform allows us to recreate animal products across protein categories that outperform the animal versions in every way,” said President of Impossible Foods Dennis Woodside in a statement.

An Impossible spokesperson said that the nuggets are made from a combination of protein, fats and nutrients: “We use soy protein as our base to give the nuggets the right bite and to provide high quality protein that is important for our diet. After that, we use sunflower oil to create the fatty and juicy mouthfeel, simple nutrients such as amino acids and sugars that react during cooking to create our savory chicken flavor, and vitamins for nutrition. We also use common culinary ingredients such as starch and methylcellulose to hold the product together and retain moisture, which have the added benefit of more fiber compared to animal meat.”

Impossible certainly isn’t the first company to come out with faux chicken nuggets. Its main rival, Beyond, debuted a line of “chicken” tenders a few months ago, and of course, companies like the aforementioned Gardein and Boca have been making faux nuggets for years. But seeing as chicken is a hugely popular protein source, having more companies produce plant-based alternatives for it is not a bad idea.

According to Impossible, the nuggets you get in the restaurant aren’t very different from the ones you’ll get in the grocery store. The primary difference is in the breading; the foodservice version is designed to be prepared in a commercial deep fryer, while the grocery store ones can be made in the oven, microwave or air fryer. The nuggets are already pre-cooked.

Speaking of the grocery store, the nuggets will be available in the frozen aisle of retailers such as Walmart, Albertsons, Kroger, Gelsons, Safeway, Shoprite and Giant locations across the country later this month. They’re priced at $7.99 (MSRP) for around 20 pieces (13.5 ounces), and come in a resealable freezer bag.