After months of continuous leaks and rumors, Samsung has finally lifted the curtains off the Galaxy Z Fold 4, and as expected, the device is everything that one would be hoping for, and more. As always, pretty much everything about the phone sans the official price was something that we already knew about so it should not come as a surprise that this foldable is the next thing.

In many ways, Samsung played it safe and decided not to deviate from the foundation that was laid by the Galaxy Z Fold 3, and it certainly is a good thing because doing so could have resulted in something that no one had hoped for. Enough chatter, let's get down to business and see what the Galaxy Z Fold 4 is all about.

Starting with the display, you are looking at a 7.6-inch main display with an aspect ratio of 21.6:18, and yes, you do get an adaptive refresh rate up to 120Hz. Samsung has decided to call this Dynamic AMOLED 2X with the resolution of 2176 x 1812 pixels; making the display less wide and a bit higher. The pixel density comes down to 374 PPI with HDR10+ support. The inner display also has an under-display camera, as expected. The outer display remains unchanged at 6.2-inches with a 23.1:9 aspect ratio and with a resolution of 2316 x 904 pixels. The outer display also has a 120Hz refresh rate. Samsung has decided to ensure that the hinges on the Galaxy Z Fold 4 are better reinforced as compared to the predecessor.

Samsung has claimed that the hinges have been tested over 200,000 times without having any damage take place. The display does have ultra-thin glass, to ensure that there is more resistance to damage and scratches. Although the phone is not built for adventurers, if you do want to use it without any worry, then going ahead with it should not be a concern. 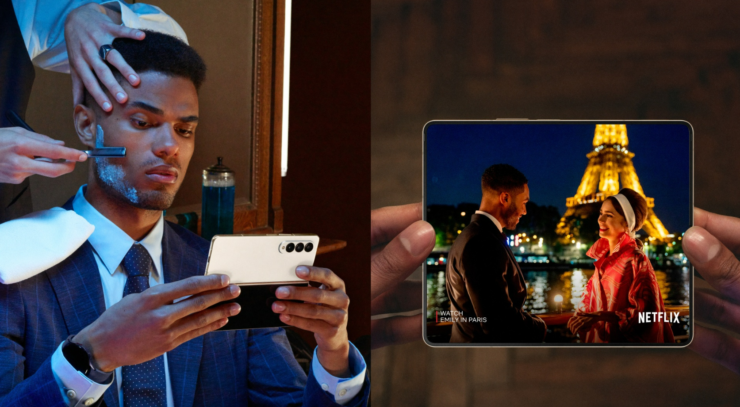 Last but not the least, the Galaxy Z Fold 4 is 6.3mm thick when unfolded and 14.2mm when folded. The phone weighs 263 grams, which should not be a surprise for anyone at this point. The phone also has IPX8 ingress protection. There is also a side-mounted fingerprint sensor that doubles up as a power button.

For the longest time, Samsung has been trying to ensure that foldable phones are a good way to serve as laptops or devices for productivity, and while I cannot say that the foldable has completely overtaken the laptops in the market, they have come far enough that will allow you for a greater experience. With the Galaxy Z Fold 4, Samsung is hoping to improve productivity to a point that a lot of people would not feel the need for a laptop. The device can fold into a flex mode which would result in a layout that is similar to a laptop. You can open up to three windows on the folding screen, allowing you greater access to everything at your fingertips.

Of course, the Galaxy Z Fold 4 will also work with an S Pen or the S Pen Pro, so if you do want to go ahead and get everything done, it should not be an issue for anyone, in the first place.

Powerful Internals Across the Board on the New Foldable

Coming to the internals, the Galaxy Z Fold 4 is, of course, equipped with the best of the best. Samsung has decided to go with the trustworthy Snapdragon 8+ Gen 1 chipset that can go up to 3.2 gigahertz. The phone also comes with 12 gigs of RAM with up to 512 gigs of storage. However, if you want to spend more money, you can also go with a 1 terabyte variant that will be coming in some regions.\

Powering everything is a 4,400 mAh battery, which remains unchanged from the last generation but Samsung knowing the efficiency of the latest Snapdragon chip, we are more than confident that the phone is not going to die on you any time soon. Sadly, the Galaxy Z Fold 4 still sits at a modest 25W fast wired charging, and 15W of wireless charging.

The Galaxy Z Fold 4 is going to come in a number of variants with the cheapest one being the 12/256GB offering. You can look at the variants and their corresponding pricing below.

The Galaxy Z Fold 4 is going to go on pre-order starting today, and the pre-order period will last till August 25th. You can get the phone in Grey-Green, Beige, and Phantom Black.