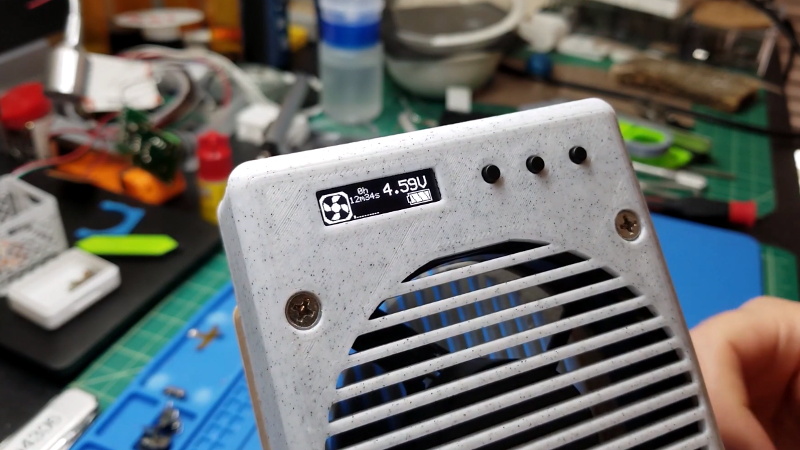 Prolific maker [sjm4306] tells us the first iteration of his soldering fan was little more than some cardboard, electrical tape, and a hacked up USB cable. But as we all know, these little projects have a way of evolving over time. Fast forward to today, and his custom fan is a well-polished piece of kit that anyone with a soldering iron would be proud to have on their workbench.

Cardboard has given way to a 3D printed enclosure that holds the fan, electronics, a pair of 18650 cells, and a easily replaceable filter. Between the marbled filament, debossed logo, properly countersunk screw holes, and rounded corners, it’s really hard to overstate how good this case looks. We’ve shamefully produced enough boxy 3D printed enclosures to know that adding all those little details takes time, but the end result really speaks for itself. 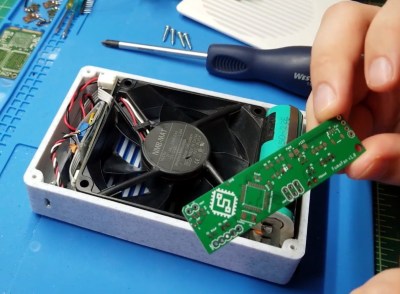 Fan internals, with a look at the custom PCB.

The user interface running on the OLED is also an exceptionally nice touch. Sure the fan doesn’t need a graphical display, and [sjm4306] could have saved a lot of time and effort by using a turn-key speed controller, but the push-button configuration complete with graphical indications of fan speed and battery life really give the final product a highly professional feel.

In the video below, [sjm4306] reveals that while the finished product might look great, there were a few bumps in the road. Issues with clearance inside the case made him rethink how things would be wired and mounted, leading to a far more cramped arrangement than he’d anticipated. Part of the problem was that he designed the case first and tried to integrate the electronics later, rather than the other way around; a common pitfall you’d be wise to watch out for.

It’s been proven that, without some external input, solder smoke is going to go right in your face. Whether or not you need to do something this complex is naturally up for debate, but if you want to keep all that nasty stuff out of your lungs, you’d do well to outfit your workbench with some kind of fan.