CD Projekt Red hasn't revealed exactly when it will roll out the long-promised PlayStation 5 and Xbox Series X/S upgrades for Cyberpunk 2077 and The Witcher 3: Wild Hunt. However, it says it's still on track to release them by the end of the year. The studio listed "late 2021" as the timeframe for those upgrades in its financial report for the first half of the year.

The timeline still fits with the Cyberpunk 2077 roadmap that CDPR published in January. At the time, it said the PS5 and Xbox Series X/S upgrades would arrive in the second half of the year. The studio also said at WitcherCon in July that a free current-gen upgrade for those who own The Witcher 3 on PS4 and Xbox One will arrive this year too, along with free DLC — perhaps in time for season two of the Netflix's The Witcher series in December.

After the abysmal launch of Cyberpunk 2077, which by all accounts ran poorly on the base PS4 and Xbox One, CDPR has released several patches and hotfixes to improve stability and performance. The game was in such a bad state at the outset that Sony swiftly yoinked Cyberpunk 2077 from the PlayStation Store, and didn't allow the game back until six months later (albeit with a warning about performance on the base PS4).

The most recent Cyberpunk 2077 patch included the first batch of promised free downloadable content. However, this only amounted to cosmetic items and a new look for Johnny Silverhand, Keanu Reeves' character. There are still expansions to the game on the way, though.

Still, given the widespread spate of game delays we've seen over the last year or so, including a couple of delays to Cyberpunk 2077 itself, its encouraging that CDPR is still confident about releasing the current-gen upgrades for both games in the next few months.

Between around a third and 40 percent of CDPR's developers are currently working on Cyberpunk 2077 support and the current-gen upgrade, according to a chart in the financial report. It's hard to tell, since the chart doesn't include actual percentages. In any case, that's down from over half of the team as of the end of 2020 as the studio gradually shifts employees to other projects. One of those is the first expansion for Cyberpunk 2077, which doesn't currently have a release window. 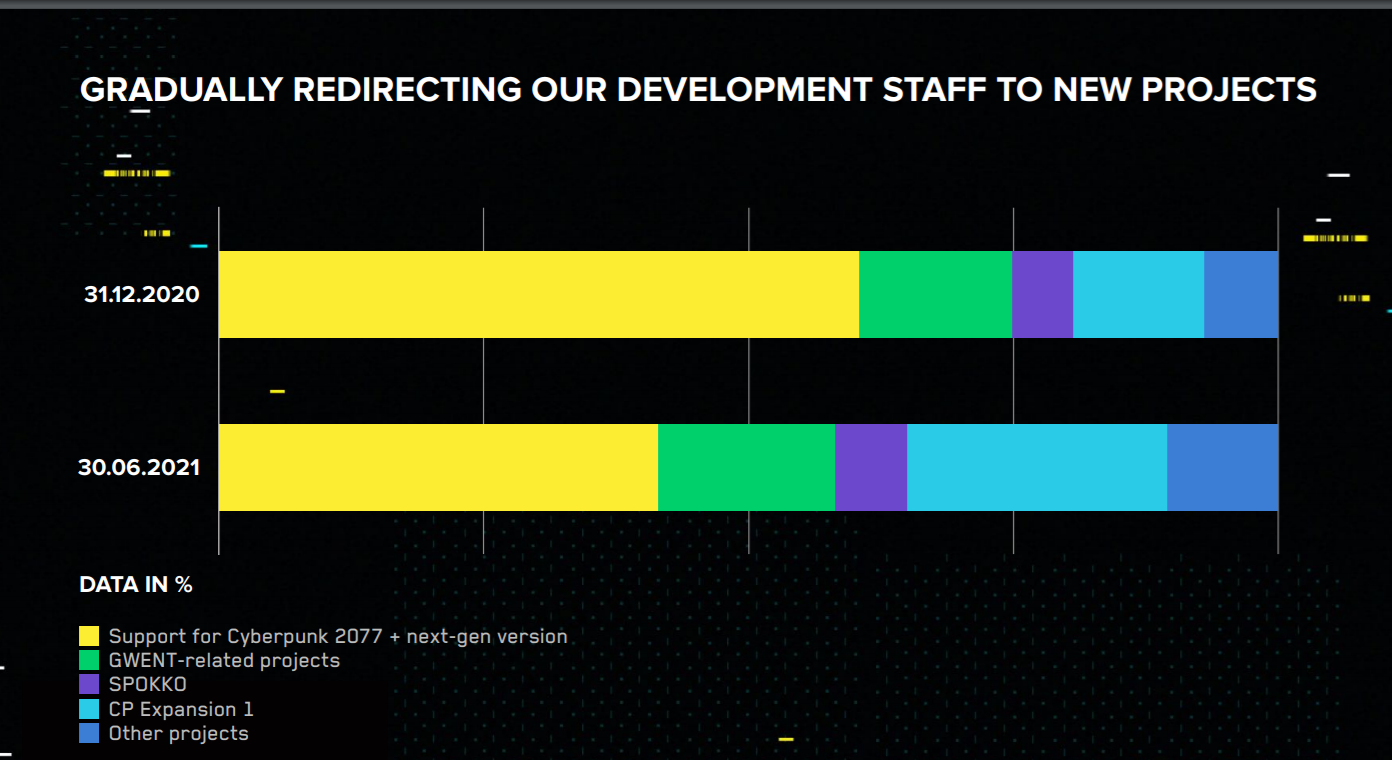