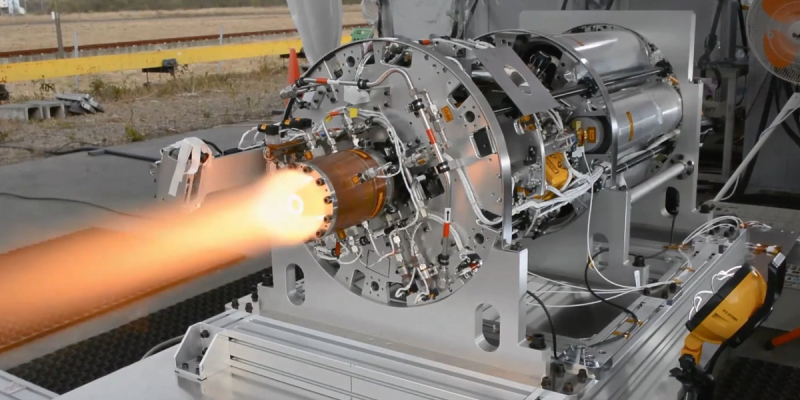 Liquid-fuelled rocket engine design has largely followed a simple template since the development of the German V-2 rocket in the middle of World War 2. Propellant and oxidizer are mixed in a combustion chamber, creating a mixture of hot gases at high pressure that very much wish to leave out the back of the rocket, generating thrust.

However, the Japan Aerospace Exploration Agency (JAXA) has recently completed a successful test of a different type of rocket, known as a rotating detonation engine. The engine relies on an entirely different method of combustion, with the aim to produce more thrust from less fuel. We’ll dive into how it works, and how the Japanese test bodes for the future of this technology.

Humans love combusting fuels in order to do useful work. Thus far in our history, whether we look at steam engines, gasoline engines, or even rocket engines, all these technologies have had one thing in common: they all rely on fuel that burns in a deflagration. It’s the easily controlled manner of slow combustion that we’re all familiar with since we started sitting around campfires. 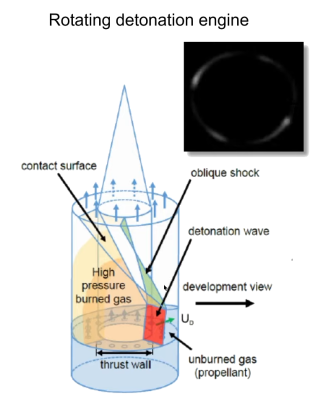 A diagram of the JAXA rotating detonation engine, showing the intended operation in which the shock wave from detonating fuel travels around the engine in the annular channel to continue the combustion cycle. Source: JAXA

However, there are potential efficiency gains to be had by combusting fuel in a detonation instead. This is where the combustion creates a shock wave that travels faster than the speed of sound that rapidly propagates the detonation reaction further, and comes with a huge pressure increase to boot. The key advantage of burning fuel in this manner is that there is more energy to be gained from that huge pressure increase. Thus, by releasing more energy from the same amount of fuel, engines operating on a detonation-based process could theoretically be more energy efficient.

There are several issues with operating an engine on a detonation-based cycle, however. It can be difficult to sustain a continuous detonation reaction. Additionally, large spikes in temperature and pressure from the detonation process and the associated shockwaves can easily damage or destroy parts made of even very tough materials. Thus far, engineers in many fields have struggled to tame and control detonation processes to the point where they can be used successfully.

The rotating detonation engine consists of a combustion chamber that has a annular, ring-type construction. In this ring, fuel and oxidizer is injected, and ignited in such a way to detonate the mixture. The aim is for the shockwave of this detonation to travel around the ring-shaped combustion chamber causing further detonations as it goes in a continuous cycle.

Getting the concept to work has proved difficult; despite the concept being first developed in the 1950s at the University of Michigan, it was only in recent years that engineers had successfully demonstrated a rotating detonation engine in continuous operation. A team at the University of Central Florida demonstrated a hydrogen-oxygen fueled engine in 2020, producing up to 200 lbf (890 N) of thrust in testing. The feat was achieved through careful tuning of the size of the jets that inject the propellants to get the mixture just right for controlled detonation to go on. Get the mixture wrong, and the fuel will burn in a slower deflagration, with no benefits to thrust or efficiency.

Unlike the experiment by the University of Central Florida, the Japanese effort involved launching an actual rocket. The test used a standard sounding rocket with a conventional engine to launch the test payload hundreds of kilometers above the Earth, with the second stage of the rocket mounted the rotating detonation engine. The mission took place using sounding rocket S-520-31, launched from the JAXA Uchinoura Space Center on July 27, 2021. 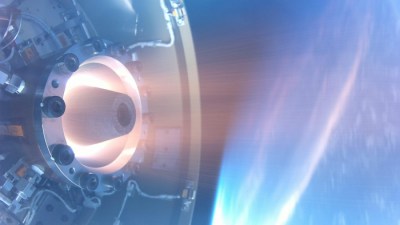 The second stage fired successfully, running for six seconds and producing 112 lbf (500 N) of thrust during that period, 56% of the Florida team’s ground demonstrator. Data collected from the experiment confirmed that the engine operated as expected, combusting its fuel in the detonation regime.

JAXA hopes to put the technology into practical applications within five years, given the successful demonstration of the flight hardware. Built in collaboration with a team from Nagoya University, the hope is to develop the technology further to create more efficient spacecraft in future. It could find application in a variety of areas, from first stage and second stage rocket motors, to being applied to deep space missions to make the most of limited fuel resources.

The technology has come a long way in the past few years. With multiple independent groups now demonstrating working engines, it’s shaken the “impossible” title that had become attached to the rotating detonation concept for half a century. Obviously, much engineering will be required to build practical engines that outperform existing designs. However, with the recent strides made in the field, there’s now a spark of hope that tells us it could be done.