Google is bringing its handy Smart Replies to Google Docs comments in the coming days. You'll see suggested responses just underneath the reply box in comment threads. You can still type your own comments or edit a suggested one, but opting for a Smart Reply could save you a little time if Google proposes one that does the trick.

Smart Reply will be enabled for all Docs users by default, though you can switch it off through the Preferences section of the Tools menu. The feature is only available in English for now.

Google has added the AI-powered Smart Reply and Smart Compose features to several of its products over the past few years, perhaps most notably in Gmail. Since January, those who add comments in Docs have been able to use Smart Compose and autocorrect, so Google is effectively completing the circle here. 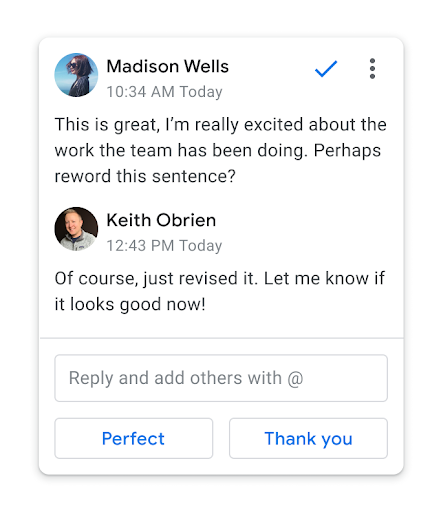 Smart Replies might not always have that personal touch, but they often get the job done since Google takes context into account when it offers suggestions. They might also help you avoid lashing out when someone proposes cutting a perfect joke from your document — not that I'm speaking from personal experience or anything.

Companies using a Rapid Release Workspace domain should start seeing the feature over the next couple of weeks. Google plans to roll it out to everyone starting on September 13th.