If everything goes accordingly, Samsung will be launching the Galaxy S23 series early next year around the world. Over the past few months, we have seen numerous leaks about the devices, including that all the Galaxy S23 phones worldwide will sport an exclusive version of Snapdragon 8 Gen 2.

Today, we have some news about the Galaxy S23 Ultra as the phone has made its way through TENNA certification, revealing almost everything we need to know about Samsung's upcoming behemoth, and well, we have some information to shed light on.

Based on the TENNA certification, the Galaxy S23 Ultra will bear the model number SM-G9180 (although it will be changed based on the region). The phone will have a 6.8-inch display with QHD+ resolution and supposedly the same 120Hz refresh rate display. The specs are eerily similar to the ones that we found on the Galaxy S22 Ultra, but we do know that Samsung will be using new and improved panels this time around. 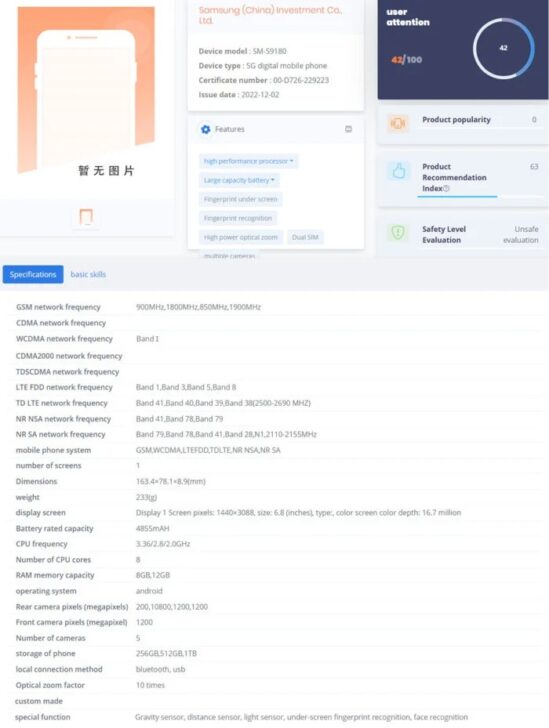 Under the hood, the Galaxy S23 Ultra will be sporting a Snapdragon 8 Gen 2 AC variant which is going to be faster than the standard AB variant found in other devices. You are also getting 8 and 12 gigs of RAM options, accompanied by the standard 256/512/1TB storage options based on the region you are in.

The Galaxy S23 Ultra will be powered by a 5,000 mAh battery. However, the certification documents show a 4,855 mAh capacity, which is common practice.

It is safe to say that looking at the Galaxy S23 Ultra, you can tell that this phone looks much like the Galaxy S22 Ultra. Based on the previous leaks, we do know that the phone is going to look identical to its predecessor, with the biggest differences being under the hood, such as an upgraded process and better cameras. Of course, Samsung will be using its software magic to make the phone even better.