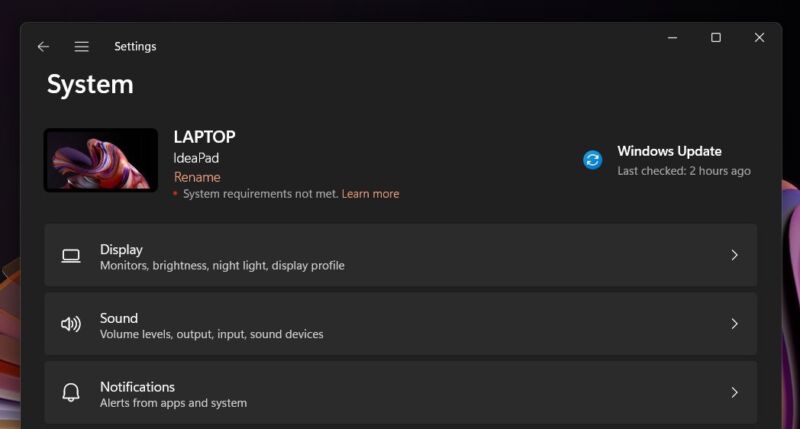 Enlarge / Windows 11 is going to keep reminding you if your hardware isn't supported, even if it's already installed and running fine. (credit: @thebookisclosed on Twitter)

If you're running Windows 11 on one of the many PCs that don't meet its stringent system requirements, your experience so far probably hasn't been all that different from someone running it on an "officially" supported system. Despite multiple warnings that Microsoft might withhold basic security updates from these devices, so far, they've gotten the same updates at the same time as "supported" PCs.

But that doesn't mean these PCs will receive updates in perpetuity, and Microsoft does still want you to know that your PC is unsupported when it doesn't meet the system requirements. To that end, Twitter user Albacore has discovered a message at the top of the Settings app that will remind you when your PC doesn't meet Windows 11's requirements. To date, these kinds of reminders and warning messages have happened before and during the Windows 11 install process, not after.

This new message is one of a few new experimental features lurking below the surface of Microsoft's current Windows 11 testing builds. Others, which as the company has recently noted may or may not ever see the light of day, include customizable "stickers" for the desktop, a sustainability rating to measure and improve your PC's power efficiency (shades of the Windows Experience Index), a possible return of some Tablet Mode features that were removed in the migration from Windows 10 to Windows 11, and a better overflow mode for your taskbar when it has too many icons in it.